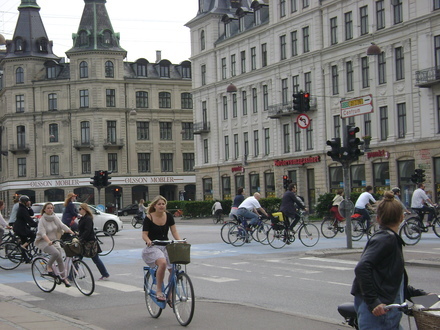 With epidemics of diabetes and obesity threatening to bankrupt state health budgets, governments need to broaden their strategies to encourage physical activity.

Allowing cyclists to ride without a helmet would remove one common barrier to cycling and encourage more Australians to get on a bike. Even if there is a small risk involved.

The story of mandatory bicycle helmet legislation in Australia really starts in the 1970s. After WWII the urban transport landscape was overrun by private motor vehicles and by the 1970s road trauma was at an all-time high.

Through the 1980s a range of road safety measures were introduced in Australia and other developing countries. Lower speed limits, traffic calming, random breath testing and substantial road safety media campaigns led to significant reductions in injury rates for all road users, including cyclists.

In those glory days of road safety, attention was then turned to cyclists. Motorcyclists had already faced legislation requiring them to wear helmets, with some success in reducing head injuries, so there is an understandable logic that cyclists might benefit from helmets too.

In 1991 Australia introduced mandatory bicycle helmet laws requiring all adults and children to wear a helmet at all times when riding a bike, despite opposition from cycling groups.

Rates of head injuries among cyclists, which had been dropping through the 1980s, continued to fall before levelling out in 1993. We didn???t see the kind of marked reduction in head injury rates that would be expected with the rapid increase in helmet use. In fact, any reductions in injuries may simply have been the result of having fewer cyclists on the road and therefore fewer people exposed to the risk of head injuries.

One researcher noted that after mandatory helmet laws were introduced there was a bigger decrease in head injuries among pedestrians than there was among cyclists. The improvements in the general road safety environment introduced in the 1980s are likely to have contributed far more to cyclist safety than helmet legislation.

This poses a puzzle ??? if bicycle helmets protect the head from injury, surely if all cyclists wore one there would be fewer head injuries?

Helmet design standards ensure that helmets sold in Australia are able to absorb the impact of a blow equivalent to a direct impact at about 19.5km/hour. Commuter cyclists typically average 20-25km/hour, with sports cyclists often averaging over 30km/hour.

To be effective helmets can???t be too old (they become brittle and cracked), and need to fit correctly and be worn properly. This can be a problem for infrequent riders. There is also a serious likelihood that modern (soft shell) helmets have actually increased the risk of some types of brain injury (for example diffuse axonal injury), with standards only changing in 2010 to try to take this problem into account.

One early helmet study in the late 1980s reported that helmets reduced the risk of head injury by a whopping 85%. Despite criticism of the methodology at the time, this figure has been frequently repeated by road safety authorities.

But a recent re-analysis of all the major studies examining the efficacy of helmets found a substantial publication bias in previous assessments. Most helmets reduced the risk of head injury by up to 15%, if worn properly.

So helmets offer a little protection, but the road environment is far more important.

The biggest pitfall of helmet legislation is that it discourages people from cycling.

In safety terms there is a phenomenon called safety in numbers. As more people cycle, our roads become safer for these cyclists. Drivers become used to seeing cyclists and adjust their behaviour, and infrastructure tends to be improved to better cater for cycling. Even if cyclist wear helmets they are less safe with fewer cyclists on the road than they would be with more cyclists about.

Helmets are a barrier to new riders, particularly for occasional and non-regular riders. The need to wear a helmet reinforces the message that cycling is dangerous ??? with perceptions of danger a major reason people give for not cycling.

All levels of Australian governments now have policies or plans to increase the population levels of cycling. The benefits are clear: increased levels of physical activity, less air pollution and reduced congestion.

The health benefits of physical activity are particularly important. A large study in Denmark found that commuter cycling for just three hours a week led to 39% fewer deaths (from any cause, including heart disease) compared with non cyclists, taking into account other leisure time physical activities and other explanatory factors.

A recent analysis compared the risks and benefits of leaving the car at home and commuting by bike. It found the life expectancy gained from physical activity was much higher than the risks of pollution and injury from cycling.

It is clear that the benefits of cycling outweigh the risks, with helmet legislation actually costing society more from lost health gains than saved from injury prevention. With Australia and New Zealand the only countries with mandatory helmet laws for cyclists, we have a lot to learn from our international cousins.

Smith NC and Milthorpe FW. An Observational Survey of Law Compliance and Helmet Wearing by Bicyclists in New South Wales ??? 1993, Sydney: NSW Roads and Traffic Authority; 1993. (not available on-line, but many on-line references to it)

The same thing happened in New Zealand when helmet legislation was introduced there:

Rates of head injuries among cyclists, which had been dropping through the 1980s, continued to fall before levelling out in 1993:

It is very important to note that the statement in this document ???An ATSB study which reviewed numerous epidemiological studies published during the period 1987 to 1998, found ???overwhelming evidence in support of helmets for preventing head injury and fatal injury.??? refers to a study now discredited for publication bias in a recent re-analysis.

There is no question that cycling has many health benefits:

It is clear that the benefits of cycling outweigh the risks: